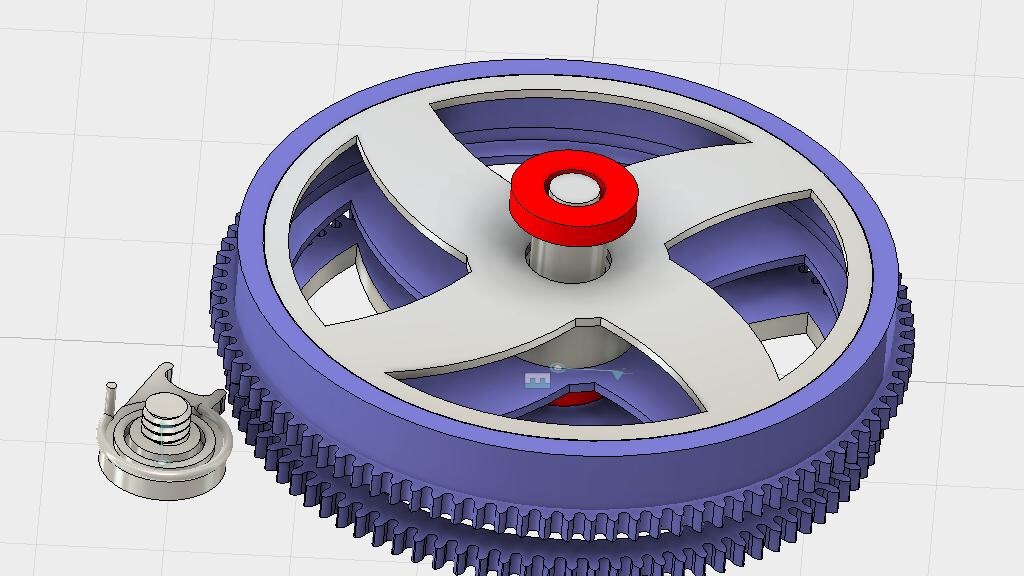 This is the first component I started to make for this design of the watch. The barrel itself is relatively simple, the complicated part I think will be making the arbor. I have chosen to make it out of commercially pure grade 2 Titanium; this grade has been chosen as I believe it is easier machining than the commonly-available grade 5.

I put a length of 16mm diameter titanium bar in the Hardinge and faced the end perpendicular. This face will be stuck to the ‘wax’ chuck with superglue so needs to be flat. A few blanks were parted off at 2mm thickness ready to be turned to size on the Schaublin 70. 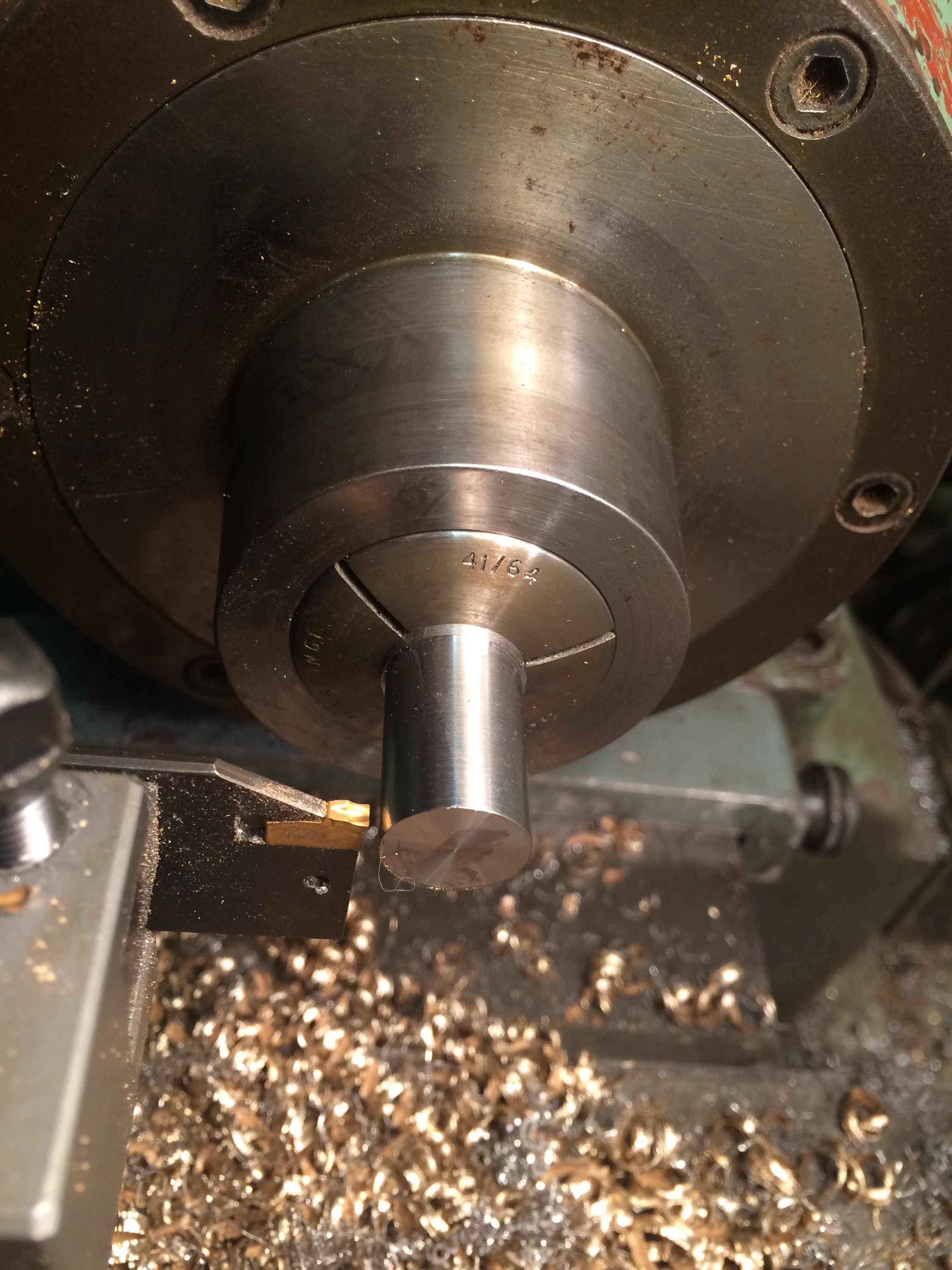 I was very pleasantly surprised to discover how well the grade 2 machined with a sharp HSS cutter. I have previously worked with grade 5, which I remember as requiring more careful handling.

The titanium blank was then stuck to the wax chuck with superglue ready to turn the outside to size for the tips of the teeth and turn a shoulder so that the body has a smaller diameter than the teeth. At this point I had two choices:
A. Centre drill and bore out the inside to size for the main spring, make a 5 degree undercut lip into which the lid will snap and bore the arbor pivot to size; or
B. Move the wax chuck to the Aciera F1 and start cutting the teeth.

Instinct told me that option A was the better one in terms of maintaining concentricity by minimising transfers between machines, however eagerness got the better of me as I was keen to make my first attempt at cutting teeth.

The Aciera F1 was set up for wheel cutting using the electronic indexing head (see here and here for more details). 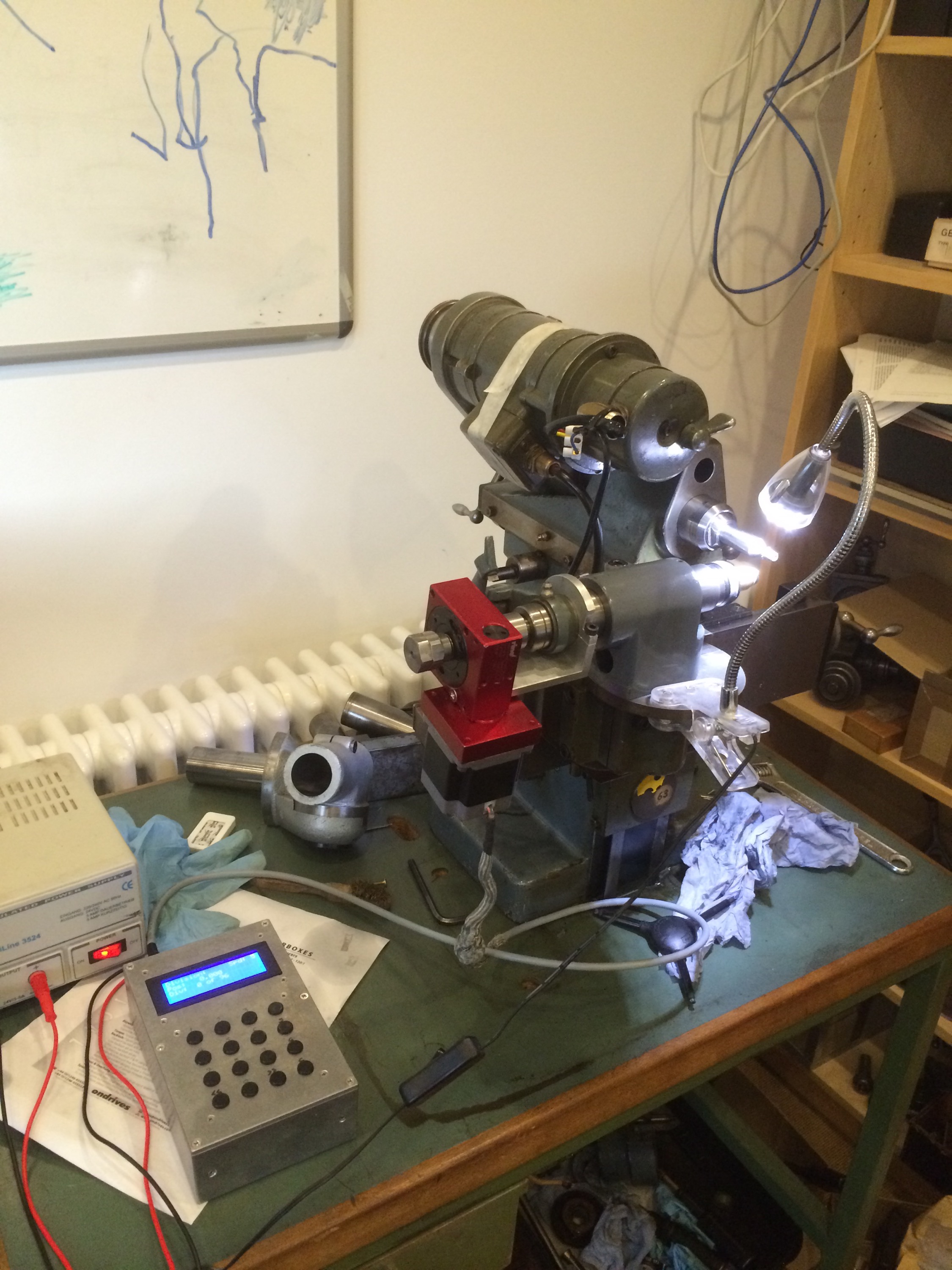 The indexing head was checked for alignment with the mill X axis and centred relative to the cutter, then it was ready for cutting teeth: 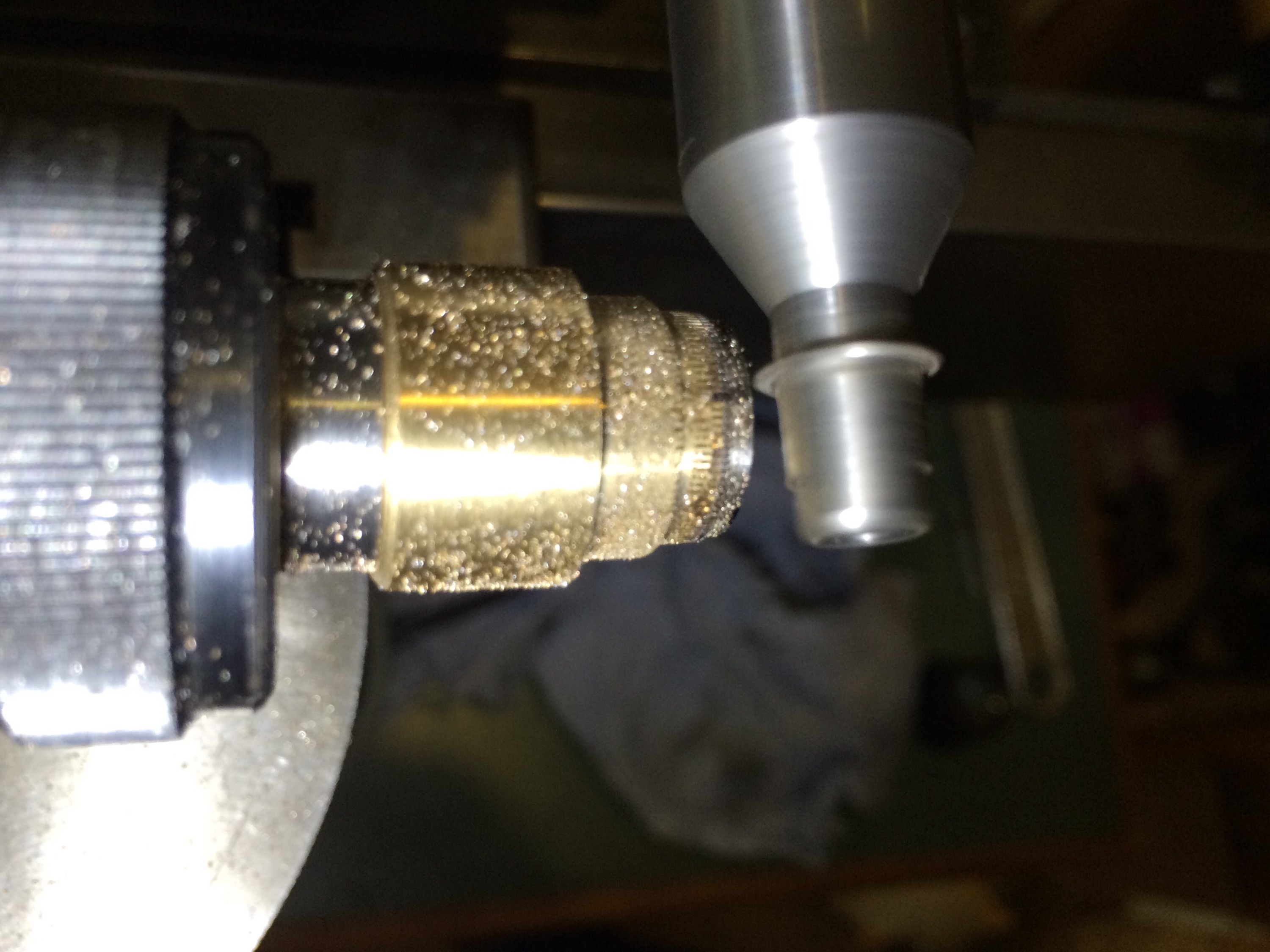 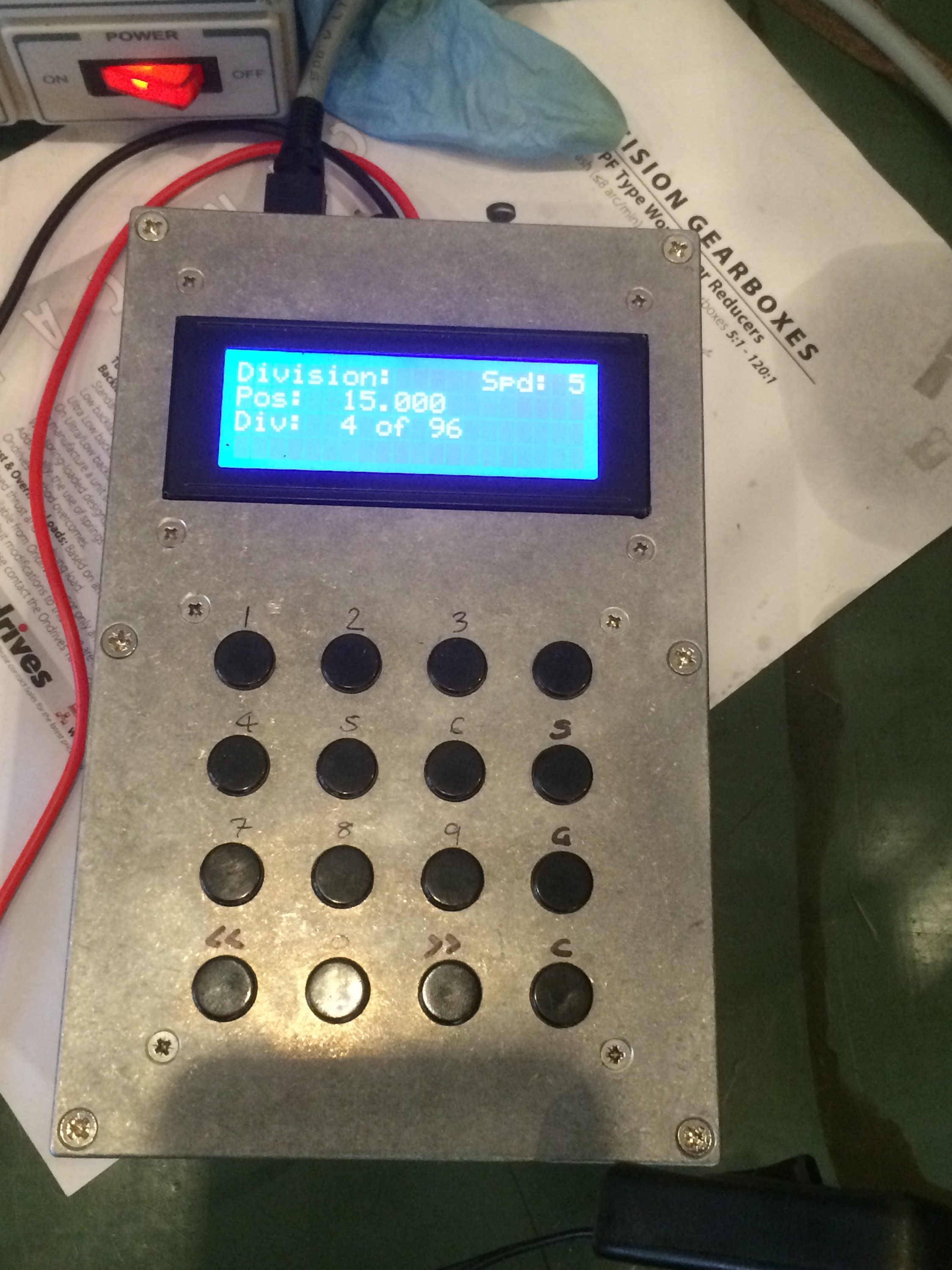 After successfully cutting all 96 teeth in two passes (0.25mm and 0.16mm depth to minimise the load on the cutter) the barrel on its wax chuck was returned to the lathe for boring.

However, it was at this point that I discovered an earlier error that would consign this barrel to the scrap bin: I did not measure the thickness of the blank accurately before attaching it to the wax chuck. The problem then was that I couldn’t determine the thickness of material remaining during boring. In an attempt to rectify this error, I used a left hand turning tool to cut a groove behind the barrel, gradually widening it until I was cutting superglue and titanium instead of brass. A good plan in theory, however theory didn’t match reality and I ended up bending many of the teeth on the barrel: 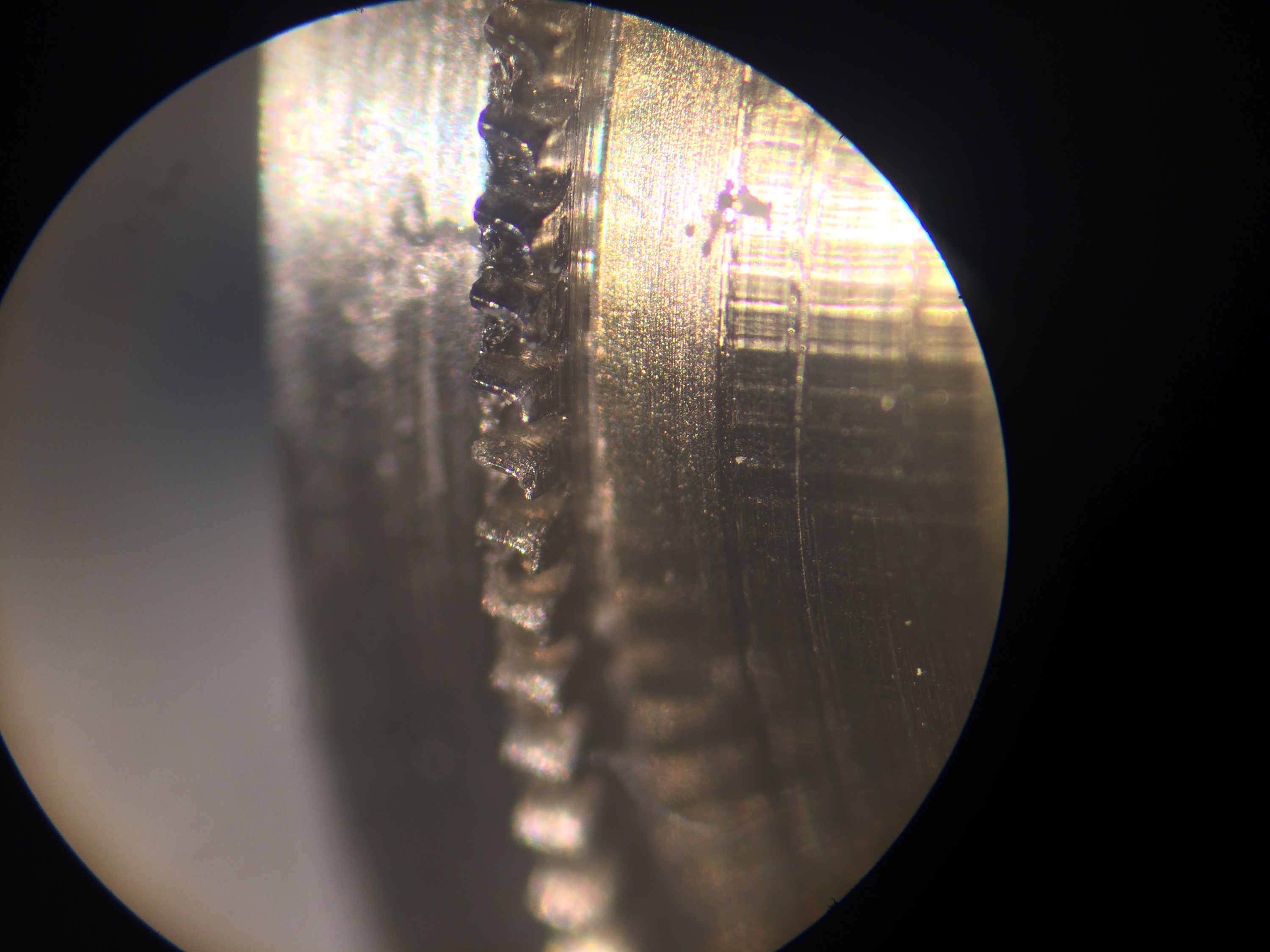 Next time I shall use a micrometer before getting the superglue out.